The chronological order of the Drenai series which does not correspond with the publishing order.

Whilst some of the placement may be a little controversial, these were arranged after talking to David after the arrangement of the Drenai Timeline. As such this has been taken into account where possible although some titles that would fit in haven’t been added as they couldn’t be nailed down sufficiently. 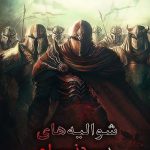