The Dragon Reborn (Wheel of Time, #3)

The Dragon Reborn—the leader long prophesied who will save the world, but in the saving destroy it; the savior who will run mad and kill all those dearest to him—is on the run from his destiny.

Able to touch the One Power, but unable to control it, and with no one to teach him how—for no man has done it in three thousand years—Rand al’Thor knows only that he must face the Dark One. But how?

Winter has stopped the war—almost—yet men are dying, calling out for the Dragon. But where is he?

Perrin Aybara is in pursuit with Moiraine Sedai, her Warder Lan, and Loial the Ogier. Bedeviled by dreams, Perrin is grappling with another deadly problem—how is he to escape the loss of his own humanity?

Egwene, Elayne and Nynaeve are approaching Tar Valon, where Mat will be healed—if he lives until they arrive. But who will tell the Amyrlin their news—that the Black Ajah, long thought only a hideous rumor, is all too real? They cannot know that in Tar Valon far worse awaits…

Ahead, for all of them, in the Heart of the Stone, lies the next great test of the Dragon reborn…. 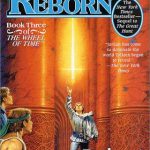