Anna still finds it hard to believe that Seth loves her and has vowed to suppress her powers, no matter what. But magic – like love – is uncontrollable and soon, Anna is being hunted. Abe wants Anna to embrace her power, while Seth is pushing Anna to accept that his feelings are real. She finally does … a moment too late. Suddenly, it’s like the Salem witch trials all over again: burnings, torture and faceless judgements. In the face of the ultimate betrayal, who will save her?
The second novel in the Winter trilogy, this follows the critically acclaimed debut A WITCH IN WINTER. 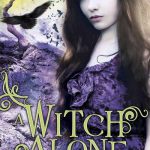 A Witch in Love