The fictional Multiverse, which consists of several universes, many layered dimensions, spheres, and alternative worlds, is the place where the eternal struggle between Law and Chaos, the two main forces of Moorcock’s worlds, takes place. In all these dimensions and worlds, these forces constantly war for supremacy. Since the victory of Law or Chaos would cause the Multiverse either to become permanently static or totally formless, the Cosmic Balance enforces certain limits which the powers of Law and Chaos violate at their peril. Law, Chaos, and the Balance are active, but seemingly non-sentient, forces which empower various champions and representatives.

The Eternal Champion, a Hero who exists in all dimensions, times and worlds, is the one who is chosen by fate to fight for the Cosmic Balance; however, he often does not know of his role, or, even worse, he struggles against it, never to succeed. Since his role is to intervene when either Law or Chaos have gained an excess of power, he is always doomed to be surrounded by strife and destruction, although he may go through long periods of relative quiet.

All the incarnations of the Eternal Champion are facets of each other, and the Champion may also be aided by a companion, who, like himself, exists in various incarnations. Likewise the Champion is often associated with a romantic interest that is possibly an aspect of an eternal figure. Other characters in the various books have occasionally crossed over from one universe to another, although it is unclear what their status in the multiverse may be. Normally, the incarnations of the Champion do not interact and are treated as a series of serial incarnations for facets of a single consciousness, but various cataclysmic events (such as the end of a Cycle of Cycles of the multiverse’s progression, or an invasion by hostile entities from an entirely separate multiverse) may bring them together in various ways. This is very dangerous (it causes strains on the fabric of the multiverse as well as mental issues for the Champion), but amplifies the Champion’s power enormously.

In every aspect, the Champion is a warrior almost without peer: when he wields some version of his usual weapon, the Black Sword (known by various names such as Stormbringer or Kanajana, although not all versions of the Sword are the same and some are active entities in their own right) few can stand against him. He is also usually an adept, if often unwilling, leader of fighters and has strategic and tactical abilities. (Source: http://en.wikipedia.org/wiki/Eternal_Champion#About_the_Eternal_Champion)

This is the sequence as published (in omnibus editions) by White Wolf Publishing from 1994 to 2000. 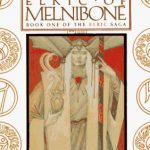