The Dark Tower is a series of eight books written by American author Stephen King that incorporates themes from multiple genres, including dark fantasy, science fantasy, horror, and Western.

The comic book adaptations of the series have been released by Marvel Comics and has been overseen by King: The Dark Tower – Graphic Novels 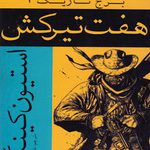