A Confusion of Princes

I have died three times, and three times been reborn, though I am not yet twenty in the old earth years by which it is still the fashion to measure time. This is the story of my three deaths, and my life between. My name is Khemri.

Taken from his parents as a child and equipped with biological and technological improvements, Khemri is now an enhanced human being, trained and prepared for the glory of becoming a Prince of the Empire. Not to mention the ultimate glory: should he die, and be deemed worthy, he will be reborn…Which is just as well, because no sooner has Prince Khemri graduated to full Princehood than he learns the terrible truth behind the Empire: there are ten million princes, and all of them want each other dead. 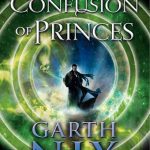