Into the Gauntlet (The ۳۹ Clues, #۱۰)

Fourteen-year-old Amy Cahill and her younger brother, Dan, have had enough. Not only do they have to find the ۳۹ Clues first, but they’re also expected to reunite their backstabbing family – the same people who killed their parents. But Amy and Dan haven’t survived explosions and assassination attempts for nothing. They have a plan to finish the Clue hunt on their own terms. Too bad there’s a final, fatal secret the Madrigals haven’t told them. A secret that could cost Amy and Dan – and the world – everything . . . 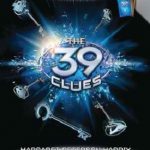